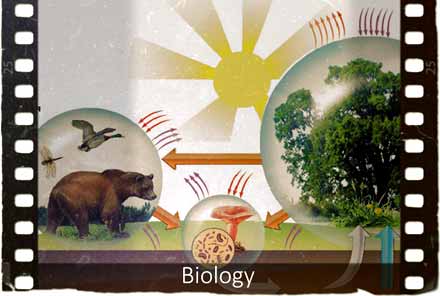 Impact on the aquatic environment:
Small crustaceans living in the water column, insect larvae, mollusks, many fish species have a peculiar type of nutrition, which is called filtration. Passing water through themselves, these animals continuously filter out from it food particles contained in solid suspensions.

Impact on the airborne environment:
The greatest role here belongs to green plants, forming the chemical composition of the atmosphere. Photosynthesis is the main mechanism of oxygen supply to the atmosphere, thereby it provides life to a huge number of organisms, including humans.
Absorbing and evaporating water, plants affect the water regime of their habitats. The presence of vegetation contributes to constant humidification of the air. The vegetation cover softens the daily temperature fluctuations at the surface of the earth (under a canopy of forest or grass. All this creates a definite, comfortable microclimate that has a beneficial effect on the organisms living here.
Largely due to the activity of living beings, the formation of gases such as nitrogen, carbon monoxide, and ammonia is controlled.

Impact on soil:
Organisms have a decisive influence on the composition and fertility of soils. Thanks to their activities, in particular, as a result of the processing by organisms of dead roots, fallen leaves, and other dead tissue, humus is formed in the soil – a light porous substance of brown or brown color containing the basic elements of plant nutrition. Many living organisms participate in the formation of humus: bacteria, fungi, protozoa, ticks, millipedes, earthworms, insects and their larvae, spiders, mollusks, moles, etc. In the process of life, they transform animal and plant residues into humus, mix it with mineral particles, thereby forming the soil structure. Building holes, making moves, animals greatly alter the properties of the soil. The soil also changes under the influence of the roots of higher plants: it strengthens, becoming less prone to destruction by water currents or wind.