Lichens are a group of symbiotic organisms, numbering over 20 thousand species. 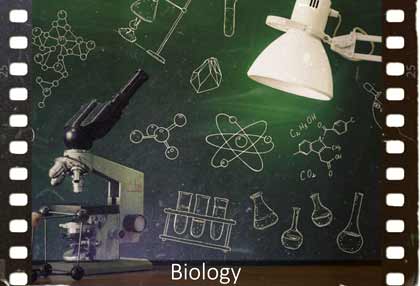 The body of a lichen – thallus – consists of fungus and algae, living in symbiosis as one organism. It is formed by intertwining filaments of mycelium, between which are located unicellular green algae. Lichen fungus filaments absorb water and minerals dissolved in it, and organic matter is formed in the cells of green algae.

Algae entering the body of a lichen, separated from the fungus, as a rule, can exist independently. A fungus cannot live separately from algae.

Lichens reproduce mainly by pieces of the thallus, as well as by special groups of fungal cells and algae, which are formed in many inside its body. Under the pressure of their overgrown mass, the lichen’s body is torn apart, groups of cells are carried away by wind and rain streams.

The variety of lichens

Lichens are diverse in appearance and color. They are bushy, leafy and scaled.

In a dark spruce forest, from old branches to the very ground, shaggy gray beards of a bearded lichen descend. In dry pine forests, a continuous carpet of branched pink, gray and white lichens forms. They crunch underfoot in dry weather. These are bushy lichens. Known as “reindeer moss”, the bushy lichen lichen is widespread in the tundra.

Leafy lichens are widespread in the form of plates of different colors. They grow on rocks and tree bark. Of these lichens, the golden-yellow wall xanthoria is especially often found on the bark of aspens.

The meaning of lichens

Lichens are very unpretentious. They absorb the moisture of rain, dew and fog through their entire surface. Lichens are the first to settle in the most barren places (on bare rocks, on stones, in deserts, on roofs, even on glass surfaces).

By releasing special acids, lichens slowly destroy rocks. When they die off, they form the soil on which other plants can live.

Lichens grow very slowly. For example, reindeer lichen grows only 1 – 3 mm per year. The lifespan of lichens is up to 50 – 100 years.

In the heat, lichens dry out so much that they seem completely lifeless and easily crumble. But after the rain they come to life again.

The practical significance of lichens is quite large. In the North, they serve as the main food for deer in winter. From some species of lichens, paint and litmus are obtained, which is necessary for the chemical industry. Many types of lichens are used in medicine and perfumery.